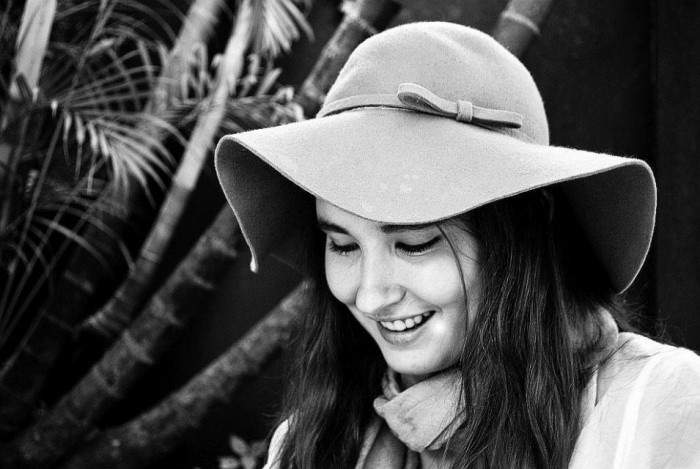 Paige Townsend is not your ordinary 24 year old writer. We spend an afternoon with her to chat to her about her published work and her inspiration.

Awkwardly delicate, this enchanting lady defines eccentricity. Not just through her published works – but because her eccentricity shines through her vibrant, yet gentle aura. That was clear to me the moment she walked into the little Mount Tamborine coffee shop on the Gold Coast where we agreed to meet for our interview:

She’s tall and slender, wears a cowboy hat low on her head, and applies many layers of intricate clothing on, which match her mysterious persona. I can’t help but think of Tinkerbell from Peter Pan, regardless of her height. There is just something intriguing about this very special writer which makes me itch to pick up my camera and start taking photos of her. 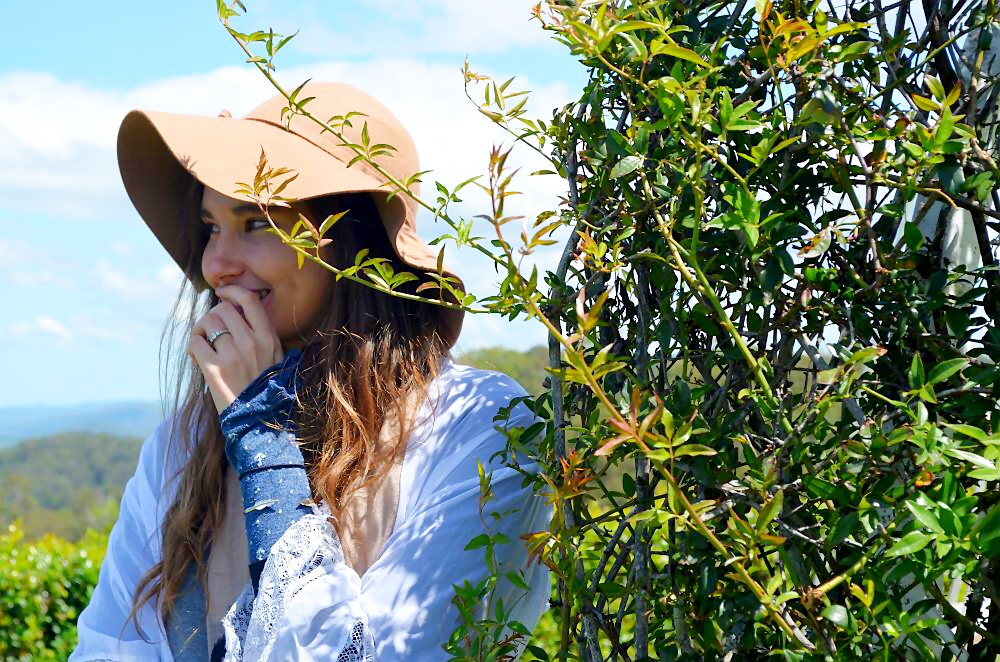 She sits down, and I notice the self-made holes for her thumbs on her long sleeve navy shirt which she wears under a white blouse. What she doesn’t realise is that even though the holes were her way to comfort herself in times such as these, it actually draws attention to her hands.Â  Hands that remind me of a piano player.

I order a Black Americano with no sugar as I’m tired and trailed by my two children on this interview who I dearly hope will behave. Paige smiles while my son asks her silly questions about Star Wars and Lego.Â  She patiently answers him. My daughter then proceeds to question her about her favourite writers. In that moment I contemplate if she should do this interview for me instead as I watch the young writer smile at her. A revelation occurs, and I realise that having my children with me today is the perfect move. Their presence comforts her. 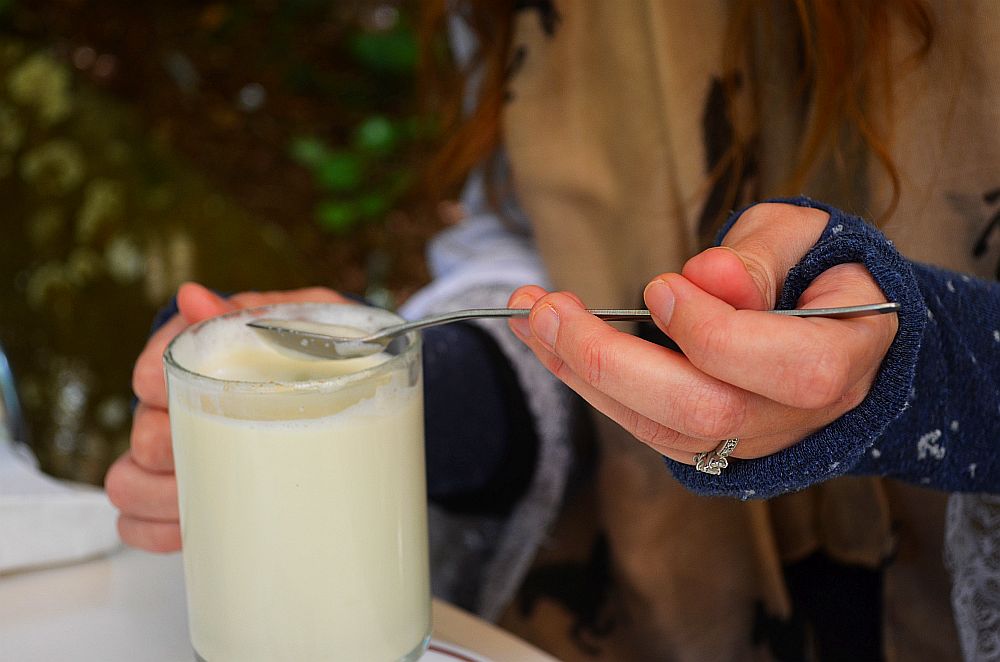 Paige orders a Chai Latte and begins to relax while bestowing a genuine smile upon me. She is ready for my questions and I cannot help but think of Tinkerbell once again. Our order arrives and we begin as I watch her cautiously stir her Latte, careful not to spill a drop.

TCI: Tell me about your published work?
PT: The Ginkgo Tree â€“ in ‘Lost Boy & Other Stories’, edited by Estelle Tang: I entered this story into the Margaret River Press Short Story Writing Competition of 2015. Margaret River Press holds an annual competition each year, and publish the winning and shortlisted stories into an annual anthology. This was my first publication.

Down the Garden Path and Tender-awful, edited by Dr Sally Breen: Two of my stories were published in Talent Implied 2015 edition.

TCI: When did you know you wanted to become a writer? Was there an underlining current which drove it, or was it in some way a form of therapy, an escape or a way to transcend from our mundane day to day existence?
When I was about seven I was obsessed with the film DragonHeart. I remember wanting to write down all the lines to preserve it, having no conception of movie scripts or the durability of film back then. I wrote it in orange pencil and gave up fast.

I like to imagine this was a precocious first step into wanting to be a writer, but in reality I guess it was more about fleshing out the world in a different way to accommodate discomfort or difference. Little things – I remember one night when I couldn’t sleep, I pretended the whole world couldn’t go back to sleep ever again, but everyone had to lie in bed and keep up the pretense. So I think it’s all of those things. Therapy, escapism, and a sense of connection. All those things coming together with the dream of making something new and enfolding. 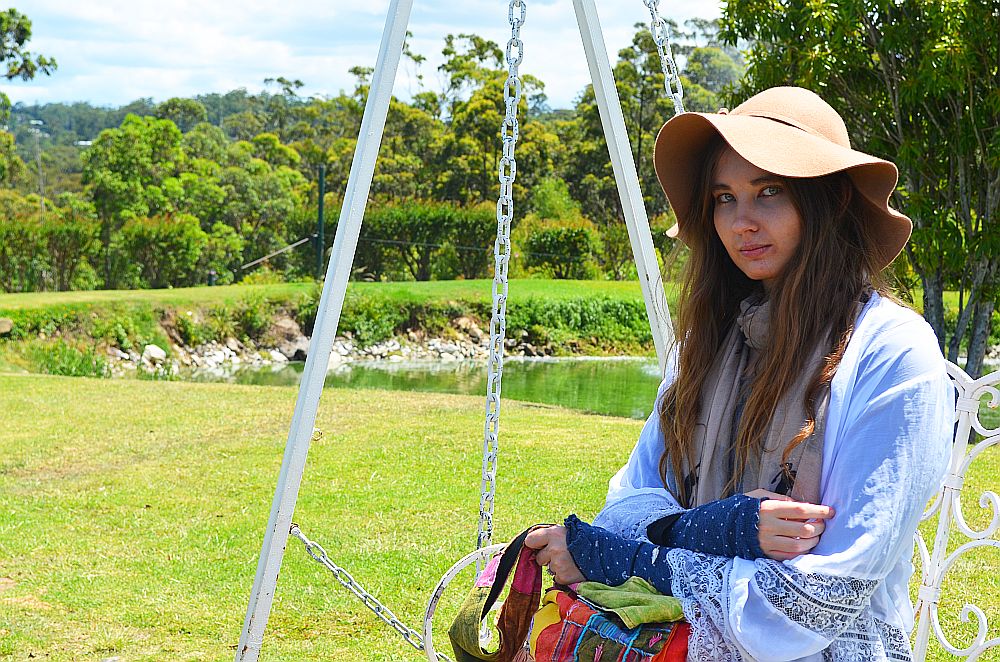 TCI: There is something ethereal and surreal about you; an energy people pick up on in your presence. Do you have any idea that you have that power, both in your writing and as a young woman? How does that make you feel when I tell you that?
I certainly never think of myself in that way. Usually I just feel like an awkward dag. That’s a lovely thing to be told, though. It feels like my dagginess is mythologised into something ethereal. I guess it’s why reading and writing are so amazing. They let us catch glimpses of such different perceptions. Sorry… I think now I’m trying to be ethereal.

TCI: Itâ€™s interesting to contemplate how you see yourself and how others see you. When you won the 2014 Griffith University School of Humanities writing prize for your short story Vanitas, what was it like to win and to get on that stage when you found out, since it was the first prize you ever won?
Entering any writing competition is always such a shot in the dark, and I try to keep my expectations away from the idea of even placing; winning one for the first time was surreal and an honour. It gave me a lot of hope, and a drive to keep going forward. But I always go in assuming I won’t place, that it’s all in the thrill of the chase. 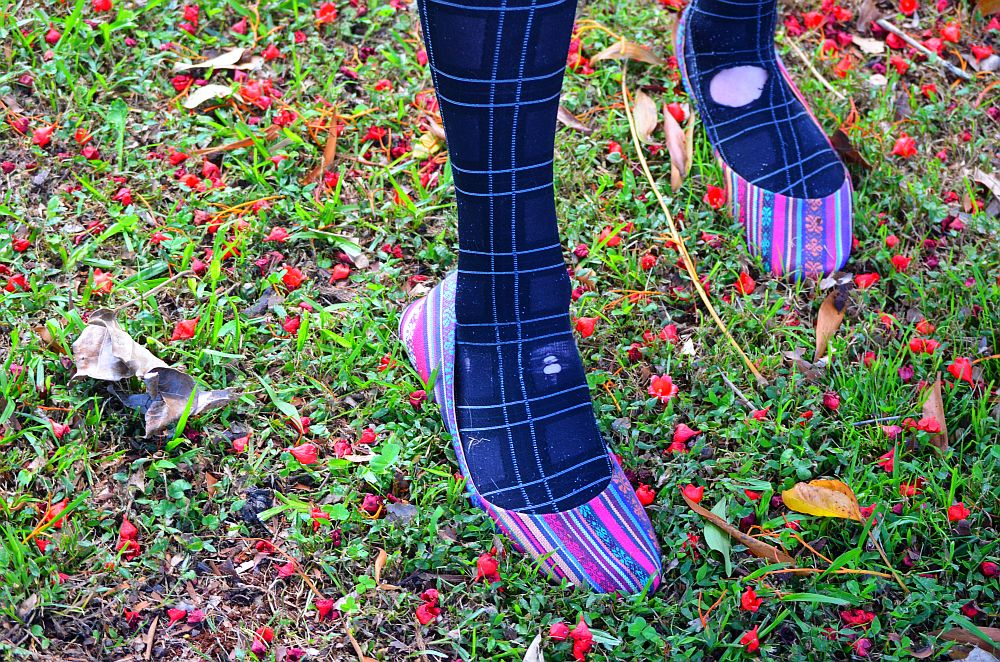 TCI: Are you there at that point where you can actually say to yourself “Yes, Iâ€™m a good writer,” or do you still doubt yourself?
I know I want to be a writer, but itâ€™s easy to look at other writers’ work, to read whatâ€™s out there and feel so small; yet in a good way. You become so electrified by stories. Hemingway said writers are “all apprentices in a craft where no one ever becomes a master”. Sometimes when I write, I feel something integral is missing, but that one day I’ll be able to put it all together exactly how it should be. I think I get a bit lost in turning stories into these constructs. Which, of course, is what a story is.

There’s this short story by Amy Hempel called In the Cemetery where Al Jolson is Buried. It’s rhythmic and delicious, woven but sincere, and I read it every once in a while to remember what’s at stake, if that makes sense. It’s honest, it interacts with reality and you can feel it standing next to you.

TCI: Which authors would you say have influenced your writing style?
Since I was fourteen, my favourite book has been the same: The Secret History, by Donna Tartt. And lately I’ve been reading Patrick White – The Vivisector floored me. He wanted to write a novel that would resemble a painting.

TCI: Tell me about something you have seen or read that has left an eternal mark on you. Something that clicked your mind and held you so tight that there was no other option but to pick up a pen and write?
A bit of a generalisation, but music concerts. The whole experience, seeing them perform, hearing the music, the lyrics. That always makes me want to write. The sensory overload, and the sense of connection in the crowd, everyone’s emotions fusing together – everything I want in writing.

TCI: Give me a famous quote from history that always sticks with you.
It would have to be Dr Hunter S. Thompson. â€œAs things stand now, I am going to be a writer. I’m not sure that I’m going to be a good one or even a self-supporting one, but until the dark thumb of fate presses me to the dust and says ‘you are nothing’, I will be a writer.â€ Thatâ€™s a good one. Definitely the one I choose. 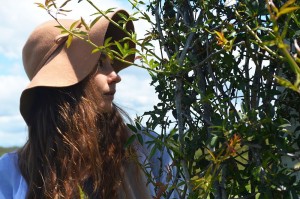 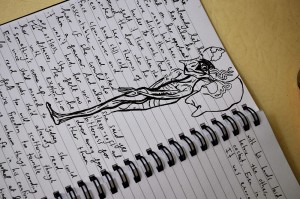 The interview concludes, and Iâ€™m left with a sense of nostalgia, reminiscing The Magic Far Away Tree by Enid Blyton, the first book I ever read as a child. Paigeâ€™s answers make me wonder whether Blytonâ€™s book was the influential birth of my own love of writing, and what would happen if everyone thought back to their childhood once in a while. Would they too be reminded of some kind of magic from long ago?

My wool-gathering thoughts in order, I tell Paige itâ€™s time for her photo shoot, even though I have been sneaking photos of her throughout the interview.Â  I’m not ready to let her go just yet as I have the perfect place in mind for more photos. Somewhere I myself used to go when in need of inspiration. Hinterland views, a lake, an antique swing, serenity, and an overgrown ivy archway.Â  A secret garden.Â  Paige is nervous yet smiles again at my son who is pulling silly faces. Iâ€™m counting on this, as her true beauty is in her modesty. 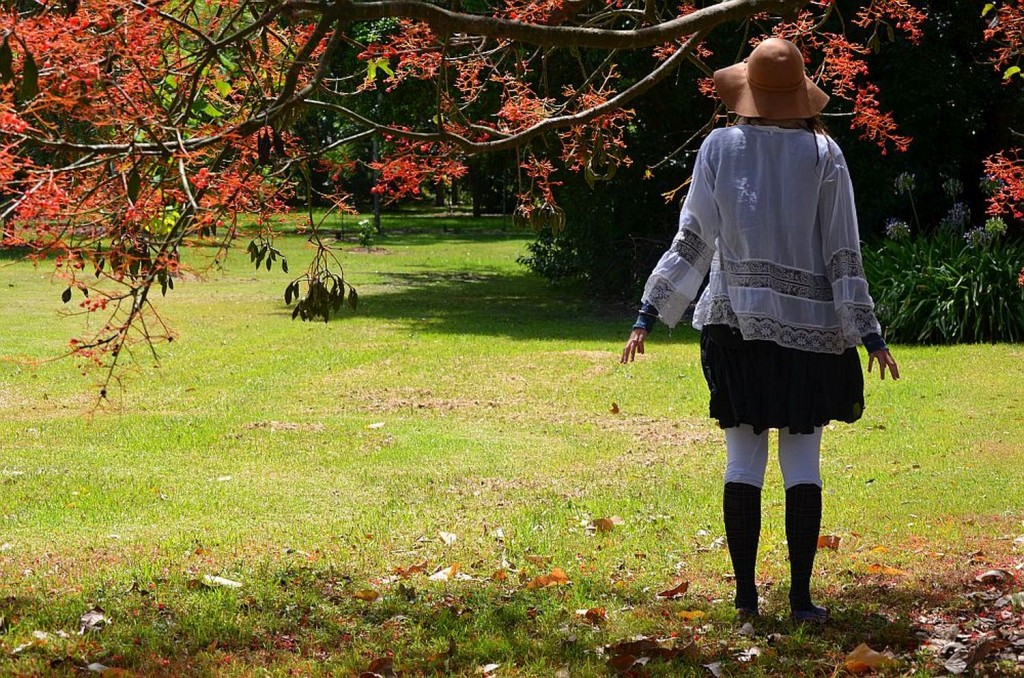 We leave the coffee shop and I take this extraordinary writer, together with my two little misfits to buy some Tamborine fudge, so that she doesn’t have to listen to the words “are we there yet” repeated the whole way.

As we drive, we spot the most incredible tree with amber leaves, already preparing for autumn. I stop the car and Paige and I smile at each other; an understanding without words. I grab my camera and start to take photos. Paige looks at me with a shy smirk and I laugh and tell her to just be herself.Â  That is when the magic happens. We are back in Neverland. 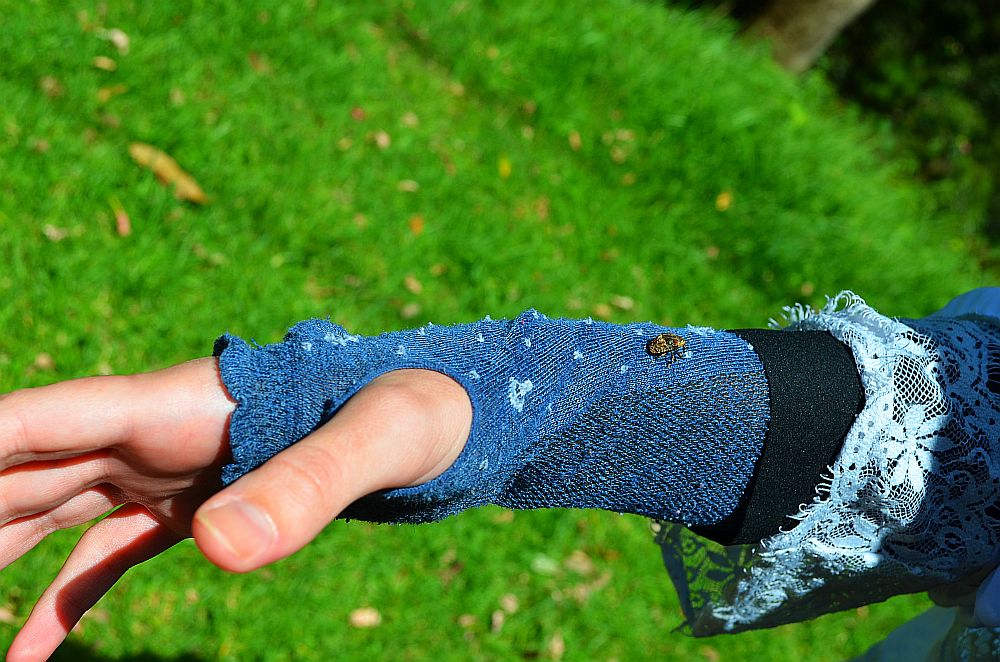 A beetle lands on her sleeve and my attention is once again drawn to her hands. Not a piano player’s hands, a writerâ€™s hands. That is now clear.

We arrive at the secret garden, and I sense Paige’s excitement matching mine.Â  My camera does the work for me as she explores.Â  I focus my lens on her while she sits on the swing and an overwhelming sense of calmness surrounds us.Â  Even my children silently sit on a large rock as I work. The wind dies down and it’s eerily quiet.Â  Paige tells me that our interview and this experience has been a breath of fresh air for her today and that it was just what she needed.Â  I am humbled by her grace.

We conclude and I drive her back home while we talk about music we like and books we have read lately.Â  I am almost embarrassed to admit to her that I have been getting into one of my daughter’s teen book series after such an extraordinary interview, especially when she says goodbye and leaves me with a quote from her favourite book. The Secret History by Donna Tartt. â€œDoes such a thing as ‘the fatal flaw,’ that showy dark crack running down the middle of a life, exist outside literature? I used to think it didn’t. Now I think it does. And I think that mine is this: a morbid longing for the picturesque at all costs.â€ 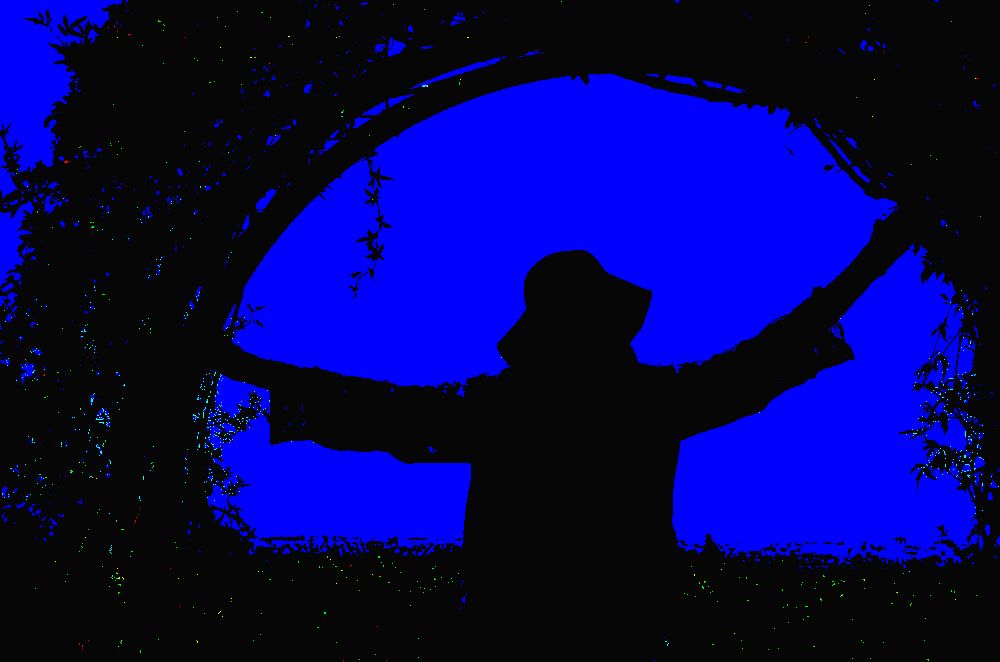 Lost Boy and Other Stories, featuring Paige Townsend’s ‘The Ginkgo Tree’, is available for purchase from Margaret River Press.