Tyrone and Lesley In A Spot

The inimitable Tyrone and Lesley entwined their beautiful, funny music with moving images of skies, suns and moons, clarity and clouds,Â flickering bulbs and high windows. An evening with these two gentlemen songsters withÂ ukuleles is an evening well spent.

It was a ukulele-led dance of screen and song where there are no wallflowers. It was funny ha ha, funny weird and a little bit funny valentine. Itâ€™s Tyrone. Itâ€™s Lesley. Itâ€™s their high spots in bright lights.Â Â Charming, poetic, absurd and unique, I have never seen anything like this.

TyroneÂ and LesleyÂ created songs on the ukulele, double bass and U-bass, all instruments that must be played close to the heart. First meeting in 2000 in the show Ukulele Mekulele,Â theyâ€™ve made music ever since, having released four albums: Ukulele HeartÂ (2012) ,Bear with MeÂ (2013), the soundtrack to the hit show of the same name, Gentlemen SongstersÂ (2014) and Baubles: A Ukulele ChristmasÂ (2015). With one foot on the music stage, and the other on the theatrical stage, theyâ€™ve performed to many audiences of the large and little kind. 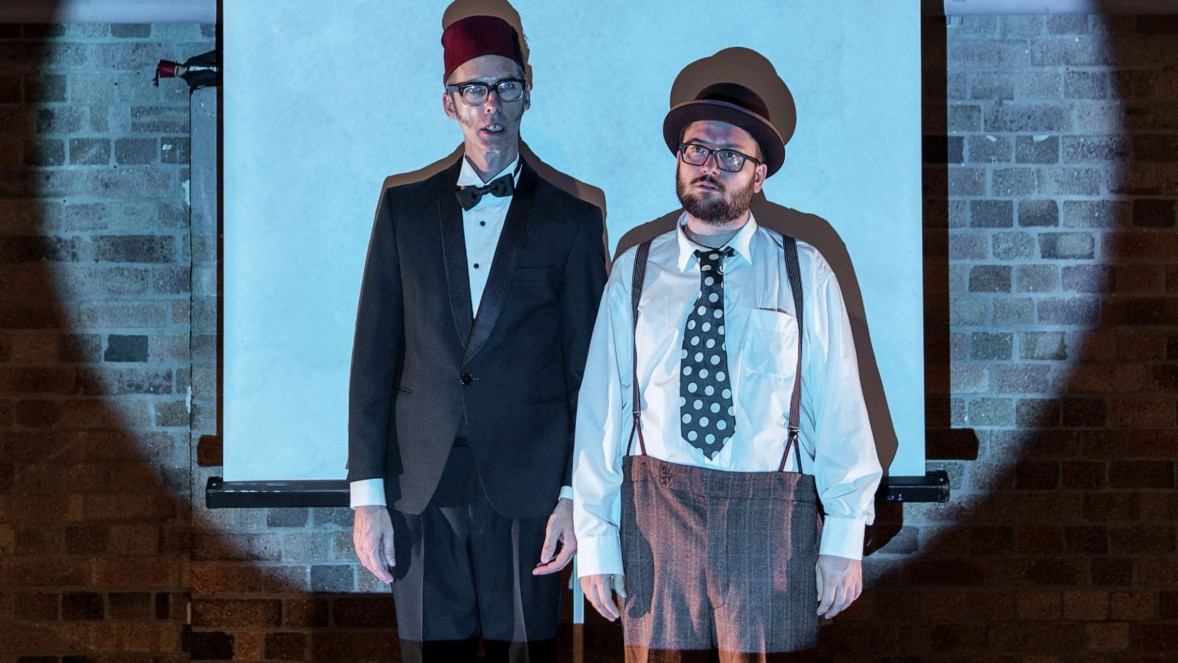 The two men combinedÂ music with moving images to create a cabaret show that is a little bit absurd and very charming. Their latest show seems to be seventeen years in the making, the songs were quirky and at times, deep and meaningful. Tyrone on the ukulele, knew exactly how to make the audience laugh with a raise of a brow or a shake of the head. He narrated the events of the night and he was an absolute delight. On the other hand, Lesley barely talked throughout the show but it didn’t seem to matter. I was transfixed on him as he skillfully played the double bass with passion. The friendship between the two men was evident as they laughed and sung together.

Developed with the assistance of Metro Arts, Tyrone and Lesley in a Spot is a unique piece of theatre. It’s a performance that knows it’s a performance, it doesn’t try to hide anything. Tyrone and Lesley’s dance moves were hilariously staged, the movements were adorable and the two were just pure magic together. The original songs took the audience on a journey of topics ranging from moths to inappropriate behaviour.Â Tyrone and Lesley in a Spot was the perfect way to spend a cold and bleak Sunday afternoon. Make sure you catch the two the next time they are in Brisbane, it would be a sin to miss it.

An Absolutely Gorgeous Frock – Tales Of A Time Travelling Songstress

Murdering It Up At ImproMafia