Get your fashionista best on as Queens Plaza launches an entire month of fashion goodness.

Queens Plaza Shopping Centre in association with Mercedes Benz Brisbane has launched Uncovering the Brisbane Look, a documentary that explores and celebrates Brisbane style â€“ and what makes it so unique, different and let’s face it maybe even a little more exciting to Sydney and Melbourne.

Directed by award-winning filmmaker Hailey Bartholomew, this documentary is local in flavour but national in significance as it combines the passion, creativity and individuality of Brisbaneâ€™s thriving fashion industry. 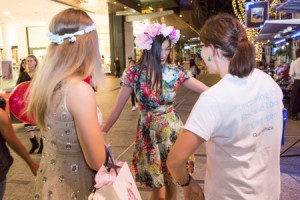 Behind the scenes of ‘Uncovering the Brisbane Look’ Image: Queens Plaza

The documentary can be viewed online as well as in Queens Plaza for the month of March.

Alongside the film, Queens Plaza is also running a unique Instagram competition. If you think youâ€™ve got the Brisbane look start posting those selfies on Instagram with #thebrisbanelook and you will go in the running to win a $150 gift card.

So go on, celebrate the Brisbane look and show this city its’ fashion is nothing to be ashamed of.