Unmoved by Free State of Jones

An ambitious account of true events, Free State of Jones, tells a lesser-known tale of rebellion within the Confederate ranks during the American Civil War.

Matthew McConaughey leads the charge as Mississippi farmer, Newt Knight, who is serving as a medic in the Confederate Army in 1862, and is painfully aware that itâ€™s a war fought for the rich by the poor. Incensed by the injustice of a newly introduced law that pardons the enlistment of rich slave ownersâ€™ sons, he absconds to swampland where number of slaves are hiding out.

There an unlikely group forms, made up of farm owners, deserters, slaves and women, who unite against confederate forces. Newt, who leads this uprising with uncompromising morality, finds love with a slave, Rachel (Gugu Mbatha-Raw) and forms a strong friendship with Moses (Mahershala Ali).

The film spans beyond their rebellion in the civil war, to the warâ€™s conclusion, where slavery still isnâ€™t abolished, where there is a new battle: the fight for the right to vote. It then catapults into the twentieth century, where Newt and Rachelâ€™s descendant is in court, on trial for an unlawful marriage to a white woman. Writer/director, Gary Ross attempts to tell an uplifting story, however his prolonged and ill-paced story becomes derivative.

In an attempt to cover too much ground, the film becomes a story that is ultimately devoid of emotion â€“ an unfortunate feat considering this is a particularly upsetting and disturbing time in history. The only moment of emotional connection comes in the aftermath of a lynching and is largely due to the depth of Ali and McConaugheyâ€™s performances. 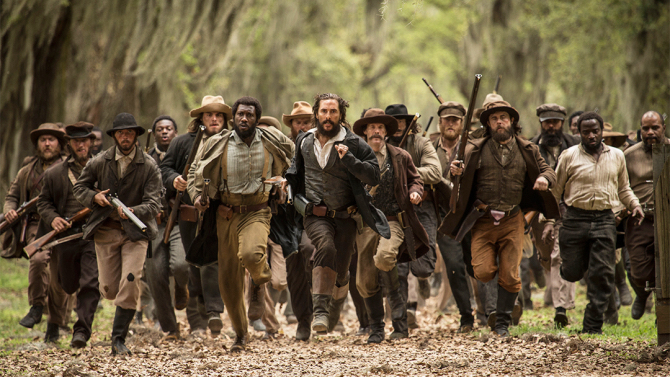 Often Ross commits the filmic faux pas of telling rather than showing the audience. Weâ€™re told of how a main character was raped and then whipped, told how Mosesâ€™ wife and son were sold into slavery, told that their rebel group has grown and has taken control over three counties. Every time the story jumps ahead in time (which happens often), a character summarises what happened during the time we missed.

McConaughey does his best to deliver a powerful performance (as do other cast members), however, he canâ€™t quite deliver because his character lacks depth. Newt, a morally unambiguous figure, has (for that time) an enlightened way of thinking and because there is very little in the way of character development â€“ it just doesnâ€™t feel totally convincing, and worse still, itâ€™s not compelling. Ross tries to easily explain away Newtâ€™s motives for taking up a stake in this fight by having his wife, Serena (Kerri Russell) ask him, “why you always got to fight other peopleâ€™s fights for them?” Â  Rachel again reiterates this sentiment later in the film.

Cinematographer, BenoÃ®t Delhomme has an intriguing approach, with some wide-open shots that have this juxtaposing effect, contrasting the natural beauty of the American-south with the red and gore of war.

Ultimately, strong cinematography and the formidable cast of Free State of Jones is not enough to overcome Rossâ€™s flat, meandering story telling.