Recently we had the absolute pleasure of speaking to Australiaâ€™s electro-folk queen, Vera Blue.

Within the span of just two weeks this powerhouse has dropped her second album- Perennial, performed at Splendour in The Grass and has begun her headline Mended tour. Perennial is the ultimate â€˜must addâ€™ mood enhancer to any playlist. With an ethereal sense of honesty in Vera Blueâ€™s lyrics, we are constantly lulled into a state of comfortability â€œin the state of vulnerability.”

Following her phenomenal performance at Splendour in The Grass 2017, we asked Vera Blue (Celia Pavey) how she enjoyed her time thereâ€¦

â€œSplendour was amazing, it was definitely a highlight. I just want to do it all again!â€ she confirmed.

The Creative Issue: It looks like you really had fun with your outfits tooâ€¦

Vera Blue: Yes I did! I was wearing Australian designer EwolÂ who makes outfits inspired by the music that she listens to. I love how she gets really creative with it, I just totally got her style! I stumbled across her on Instagram and lost my mind over some of her pieces. My favourite one I actually got to wear, which she custom made and altered for me. 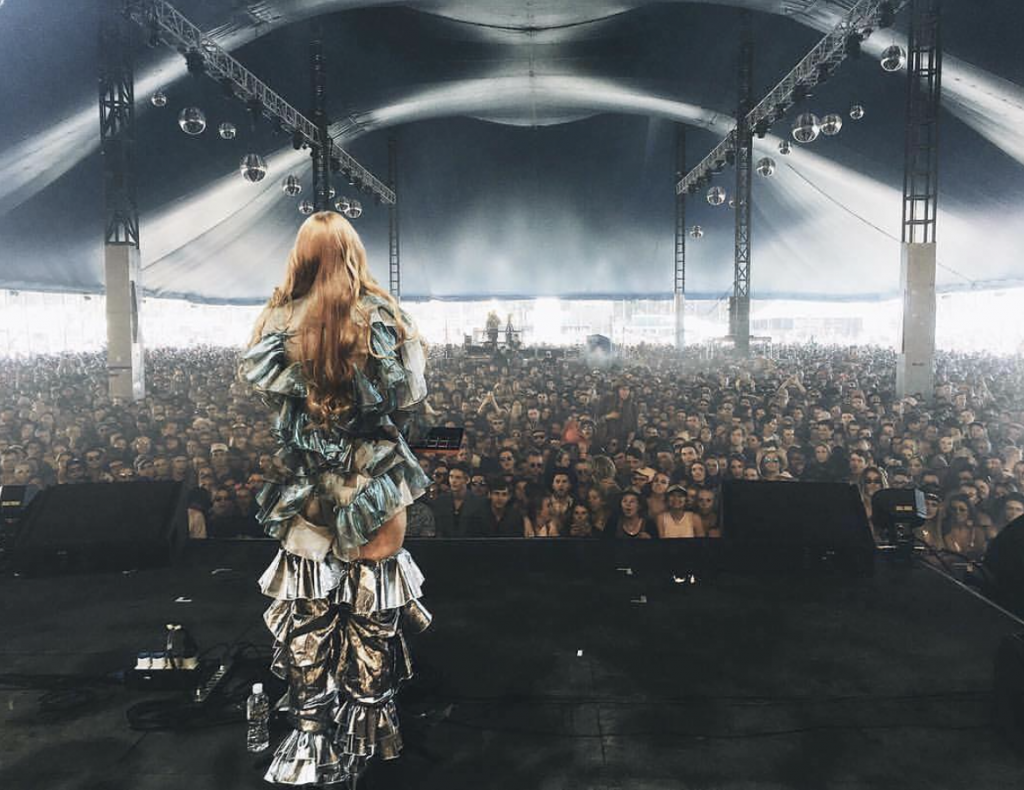 TCI: How are you feeling about the upcoming Mended tour and the very recent release of your second album?

VB: I feel so good about the album being out now, it has been a long time coming and me and the guys – Andy my producer, Thom my co-writer, Jackson my sound engineer, Gosling who worked on the early stages of the record, Adam in the states who is co-producer and my manager over there were all so stoked to have the album released. People are connecting to it and itâ€™s a really great feeling.

TCI: How do you think people have been receiving the new album so far?

VB: I think thatâ€™s kind of the thing about releasing a record, you do think a lot about how people are going to relate to it. I feel very relaxed about it being out there and about people relating to it in their own way and making my story their own story. People are really connecting to the songs, especially those like Lady Powers where I was going through a stage of empowerment, and also my songs about people going through heartbreak. Iâ€™m just happy to be able to release music that people are feeling something from.

TCI: Who would you say has been your biggest supporter throughout this process?

VB: The guys that I work with have been there right from the start and we work on the content very closely together, but my biggest supporters are definitely my friends and family. Mum comes to almost every show that she can come to and my friends are always there and itâ€™s really special having them by my side on this whole journey.

TCI: Do you think this album reflects your growth and evolution as an artist?

VB: Yeah, absolutely! The Vera Blue stuff is something that is really exciting for me! I was writing music under my real name when I discovered electronic music. I was put in a session with Andy Mak (my producer) and it was just a perfect collaboration at the perfect time and we just havenâ€™t stopped. People are really loving it and itâ€™s something thatâ€™s really special. Itâ€™s something that Iâ€™m really proud of as well and we love it. We enjoy listening to it ourselves, it sounds really funny to say that we listen to our own music but itâ€™s something that we have created with our blood, sweat and tears and we are just so stoked. 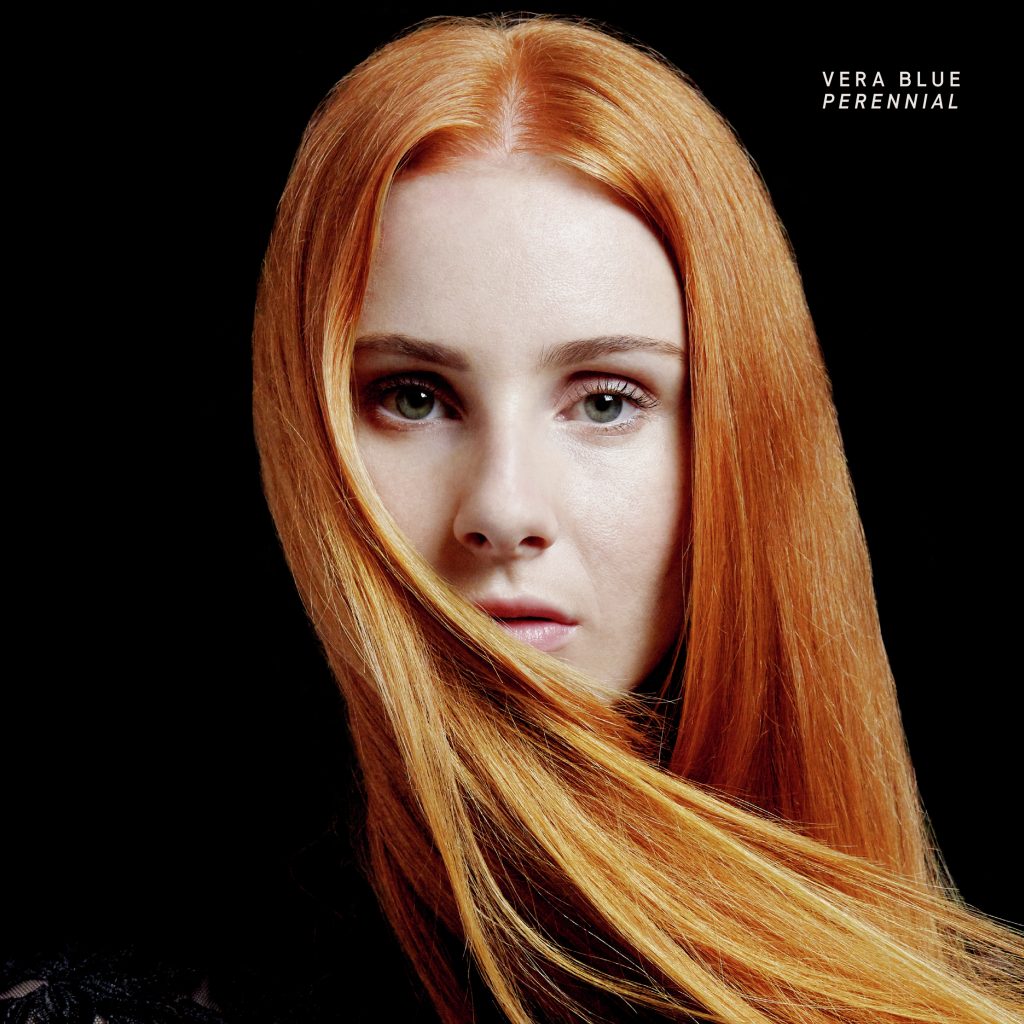 TCI: Do you feel as though Thom and Andy Mak encourage you to experiment more now?

VB: Absolutely! As a collaborative team we all experiment completely, thatâ€™s what the music that we make is about. Itâ€™s kind of like we write the songs as folk songs, as I always used to write and then we take the written folk song and just totally experiment and go all out with the sounds and really think outside the box. Weâ€™ve created some little vocal samples, drum samples, crazy cool little things that are within the songs that mean something to the song. Itâ€™s a really fun experience making music with them and itâ€™s always going to be exciting (electronic music) and broad, you can do so much with it!

TCI: Is that the sort of diversity you were going for with the juxtaposition of building intensity in songs like Private vs the sultry dreaminess of Mended?

VB: Yeah, totally. With the production of the songs it really depended on what the song was about too. There was something about Private that was really grungy and the frustration in the lyrical content, there was a lot of angst. We felt like the production for that song (Private) had to be really thick, grungy and heavy in the moments that it needed to be mysterious in a way. Whereas for songs like Mended, We Used To and Said Goodbye to Your Mother they had a lot of that folky, Celtic influence that I really connected to when I was growing up. Adding that really sultry electronica really lifted the energy of the song and made it hit you right in the chest. Itâ€™s so special being able to do that through sound with Andy.

TCI: Youâ€™re very honest in your writing, which we love. Does that sense of vulnerability ever scare you?

VB: Sometimes it does, but thereâ€™s something about the guys (Thom and Andy Mak) that I work with where they totally understand me. When weâ€™re working together in a group I am able to open up to them and just really wear my heart on my sleeve and can be who I am. Itâ€™s crazy being able to release that, being vulnerable is really quite an intense thing to be able to feel with audiences, with other people and with yourself. To be able to feel comfortable in the state of vulnerability.

Itâ€™s really nice to be able to release music and I think thatâ€™s something that people connect with, especially up on stage. Whenever I have a performance that I feel most vulnerable about, or Iâ€™m saying something that I normally wouldnâ€™t say, itâ€™s quite amazing, itâ€™s not a bad feeling. Very intense but nice, people are feeling what Iâ€™m feeling and thatâ€™s all that matters.

TCI: What process do you integrate this into when writing your songs?

VB: It depends. Sometimes Iâ€™ll come into a session with Any and Tom and Iâ€™ll feel a lyric or feel a certain way and Iâ€™ll tell them what Iâ€™m feeling and then we can start on some lyrical content or even on production. It definitely changes, but most of the time Iâ€™ll just write the whole song on the piano or guitar and then Iâ€™ll experiment and add the production later.

TCI: Do you have any advice or words of wisdom to impart on aspiring artists and people who look up to you?

VB: It sounds clichÃ©, but for them to be who they are. I think thatâ€™s something that took me a long time to come to terms with. Iâ€™ve been myself for a long time, but here I mean to fully be yourself and being totally honest with yourself. And just enjoying every minute of it, donâ€™t take yourself too seriously and just have fun and trust your instincts.

TCI: What would you define as your â€˜big breakâ€™ in the industry?

VB: Iâ€™ve been in the industry since I was on The Voice (2013), that for me was a really amazing stepping stone to where I am now. So that was a big break for me, doing Scarborough Fair on The Voice. Then after all that I did all the Vera Blue stuff and I think releasing my song Hold and Triple J totally embracing it and everything Iâ€™d already done in the industry was really special. And then I released a song called Papercups with Illy and that was really massive for me, that song touched a lot of people and made it onto commercial and alternative radio. People really loved it and that was a really big break and we even performed at the ARIAâ€™s!

TCI: We had a chat to Sam from The Jungle Giants recently and he told us about how he worked two jobs at McDonalds and a Night Owl to save money for their first EP. What kind of roles or experiences have you had prior to being able to call music your primary or sole source of income?

VB: When I moved to Sydney I went to AIM (Australian Institute of Music) and I was living off $70 a week, which was hard but okay because I was a uni student. I only went there for 6 months as when I was on The Voice, things started to pick up. I also got a lot of â€˜corporateâ€™ gigs which was good for income. After this everything declined for a little while, naturally as artists from TV shows do, so I had to pick up a job at a Pharmacy in Kudgee.

I met a couple of my best friends there who were actually at Splendour with me on the weekend, who come to every show. So, it was really a blessing in disguise. It was kind of hard trying to juggle that and then my Vera Blue stuff started ramping up, so eventually I had to let go of the pharmacy job. I feel so happy to be doing music though and I got a couple of my best friends from that experience.

TCI: Are you going to be spending the rest of this year focusing on touring or will you be continuing to write content along the way?

VB: For the next 3 months Iâ€™m touring, I started the tour on Friday in Canberra. After that Iâ€™ll go over to the States and probably do a tour there and maybe the UK as well.Â  Itâ€™ll be a very busy rest of the year touring but I think along the way I will be doing a bit of writing and working on some new music non-stop. 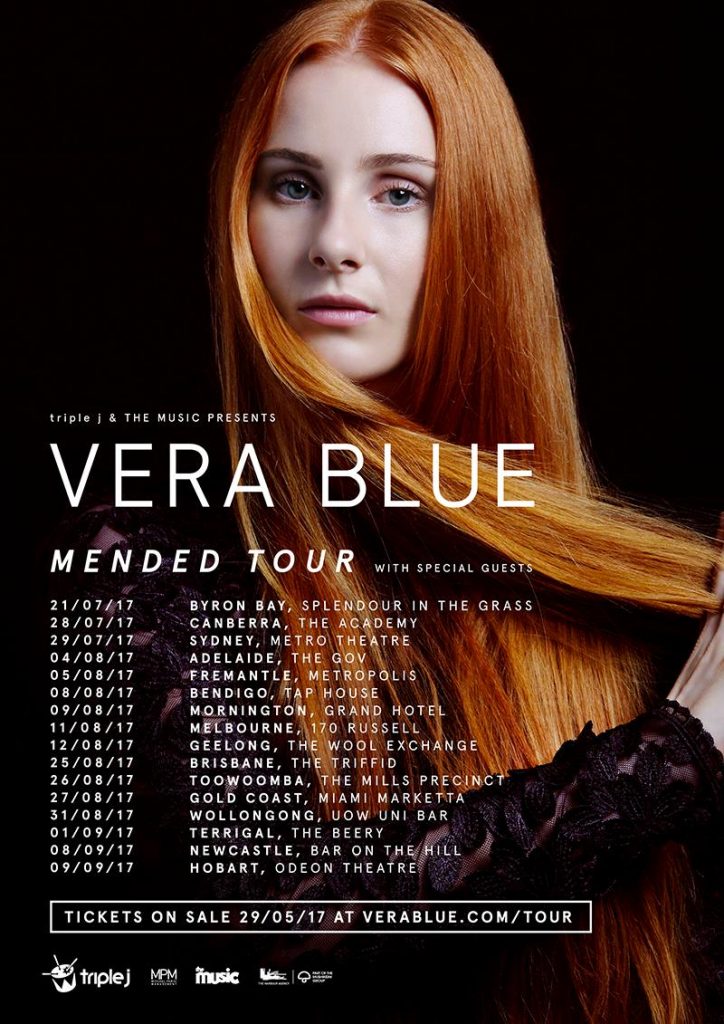 TCI: What can we expect from you in the next coming year?

VB: From now until this time next year Iâ€™ll be doing lots of touring and Iâ€™ll be writing new content, working on collaborations, just spreading the Vera love around. Internationally hopefully.

Vera Blue will be touring Australia for the rest of this year and has recently added more shows so keep an eye out for all the latest here!

The Creases on the Release of Tremolow