Long before Kim and Kayne, the world had Vivien Leigh and Lawrence Olivier.

He was the handsome actor who ruled the stage and screen with his magnetic charisma. She, the fiery leading lady who stole his heart. In the era of Old Hollywood, theirs was an epic romance.

It was also a salacious one. Rumours of infidelity swirled, as did accusations of violent fights between the lovers. 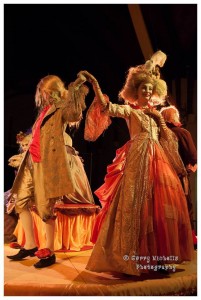 Vivien Leigh’s School for Scandal is a marries a THS with the very best of post-restoration theatre. Image: Gerry Nicholls.

In the late 40s, the couple embarked on a tour of Australia and New Zealand. They arrived in Brisbane in 1948 (where they presented with a single pineapple, of course) to perform playwright Richard Brinsleyâ€™s School for Scandal. How ironic, then, that their own lives had come to be plagued by gossip.

According to some, Olivier is said to have later claimed that he â€œlostâ€ Leigh during their visit to the colonies; Leigh was certainly rumoured to have â€˜foundâ€™ plenty of company elsewhere.

The deliciously sinful tale is the focus of the new play Vivien Leighâ€™s SCHOOL for SCANDAL. Presented by heartBeast, the production gives audiences a peek behind the red velvet curtain. Filled with beautiful people doing ugly things, the play is a cheeky new adaptation of Brinsleyâ€™s original work that marries his original text with the real-life drama that surrounded its performance.

Together with a story stranger than fiction, itâ€™s a tempting offer so naughty itâ€™s nice.

Vivien Leighâ€™s SCHOOL for SCANDAL opens tomorrow night and will run until the 26th of October.

The production contains images of sex and adult language. It is recommended for persons over the age of 16.

What? Vivien Leighâ€™s SCHOOL for SCANDAL presented by heartBeast

How much? $28 Adults (concession rates available)