West Thebarton love what they do, and they do it loud 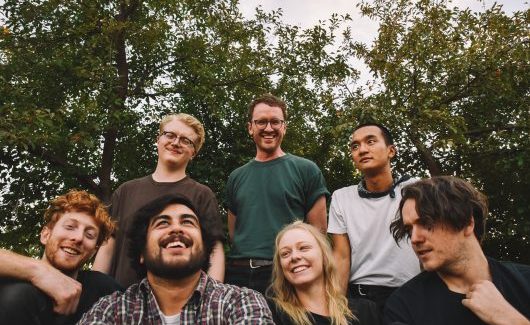 The hard rocking band from Adelaide are making big waves in the Aussie music scene. They’ve just dropped a new album, and they’re quickly developing a reputation for putting on a live show that’s not to be missed.

The seven-header group are playing The Zoo this Friday, and we sat down with band-mate Brian Bolado to chat about the story so far.

Brian picked up the phone from a grocery store in the town of Hay, located approximately two kilometres past the middle of nowhere. The tour had just started for the group, and they were making the mammoth trek from Adelaide to Sydney. To kick things off we had a chat about the band, it’s members and its history.

Brian Bolado: “I play guitar and a bit of vocal. The rest of the guitar is rounded out by Tom, JB and Healy. Ray does most of the yelling and the screaming and the singing. The rhythm section is Nick on base and Caitlin on the drums. We’ve been together for about four or five years now.

We’ve picked up a few members along the way, and our current seven have been playing for a year and a bit. We met each other through going to each-others shows, meeting at pubs, and just hanging out in Adelaide and getting together and playing music. We just wanted to be a band that hung out and played music as loudly as we wanted to. Fortunately everyone seems to be pretty excited about that.”

Excited is an understatement. The band have blown up in the last year, with hundreds of thousands of Spotify hits, sold out shows, and rave reviews for the new album Different Beings Being Different. We asked Brian about how the success has effected the band so far.

BB: “It’s hard because I guess, when we started, a lot of the stuff we really didn’t think would fall into our laps. We don’t really look far to ahead or expect to much. We like to try and be pretty humble and modest about what some like to hold up as success. We just want to be a band that puts on great fucking shows and has a great time. People come to the shows and expect us to do our reputation justice, and they get really amped about that. That goes down to the core of what we anted to do when we started the band.”

When asked if the band subscribed to the clichés of the sex, drugs and rock and roll lifestyle, Brian’s answer was straight up;

BB: “Definitely not. I don’t really have to much interest in being a brazen rock and roller. We’re seven people with there head’s screwed on. We’re not about being dickheads, we’re all about the music.”

Despite this, West Thebarton have been hailed for their manic, captivating stage performances. It came out in the interview that the frontman Reverend Ray has had his teach chipped on a guitar “more then twice”. If that’s anything to go by, The Brissy show is set to go off. Brian confirmed that from his end.

BB: “Every time we’ve played Brisbane it’s been awesome. Last time we played The Zoo it was an absolute stinker, and I’ve heard that when the new owners took over they tried to install air conditioning, but there was a petition to stop it because people thought it inferred with the vibe. So anyone who comes down to The Zoo is going to have to be ready for a very sweaty, loud affair. “

Get keen for blood, sweat and rock and roll Brisbane. You can buy tickets for the show here, and follow the band’s socials here.

Dan Potthast is the cool uncle you never knew you wanted

Band on Band with Bad Pony