The thunderous hum from above alerts the men. They rush outside to see an aircraft drop its destruction. As the bomb explodes, the men have already mobilized; they jump into a truck and head directly for the bombed site. In the rising grey dust of chaos, the men in the white helmets are Syriaâ€™s first responders, a civilian group who search for survivors trapped within the rubble.

Orlando von Einsiedelâ€™s The White Helmets premiered at the Toronto International Film Festival last week, coinciding with its Netflix release on the 16 September 2016.

For three years the White Helmets have been working on the frontlines of the bomb ravaged country, risking their lives to save victims of airstrikes. The White Helmets, who are also known as the Syrian Civil defence, have almost three thousand civilians working in 120 centres across the country. 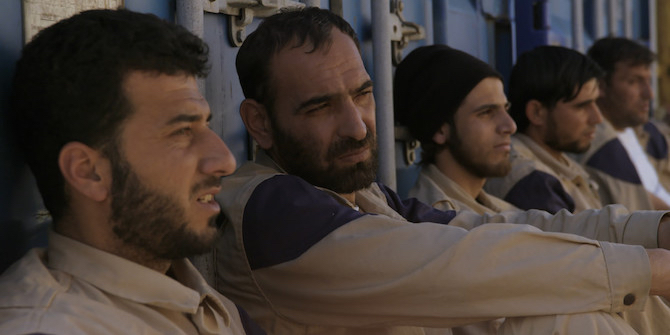 The documentary centres on three men from a team in Aleppo City. Three men who, despite the danger and trauma they endure daily, remain resolute in saving lives. Inspiring, emotional, devastating, von Einsiedel weaves a humble tale of heroism. Vividly portraying the emotional and physical trials of living every day in a war torn country, where there is a routine loss of lives and loved ones.

The White Helmets depicts the chaos and urgency with visceral cinematography, including shocking footage of the team pulling a two-week-old baby alive from the rubble and captures the warmth and compassion of these men when they meet the baby 18 months later.

A poignant exploration of compassion and strength within the harrowing realities of war, The White Helmets finds resilience, hope and courage in the men who run towards the bombs.

The White HelmetsÂ is currently streaming on Netflix Australia.

Review: We May Have To Choose