Women in Voice is back for another year and veteran Alison St Ledger couldn’t be more enthusiastic about the show’s return to the stage.

Rehearsals are underway and spirits are high as the cast of performers prepare to showcase their vocal talents for the production’s 27th year. Queenie van der Zandt will be taking the stage (as herself) alongside Pauline Maudy (Mzaza), who will be bringing some international flavour to the show, Barb Fordham and her daughter Georgie Nielsen. 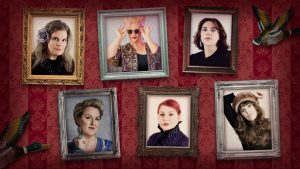 The production has been a staple of the Brisbane cabaret scene that was established in 1993, starting out in West End’s Sitting Duck Café. From there, it has morphed and grown with it’s ever-changing venues including the Princess Theatre, Judith Wright Centre and more recently the Old Museum. At one stage they “ramped up the theatrics” to impress audiences at QPAC’s Concert Hall however, they may have gotten “a little too big for their Doc Marten boots” and have since reverted to smaller, more intimate venues such as the Brisbane Powerhouse where the show will be held this year.

Over the span of its almost three decade run, Alison believes Women in Voice has become a special part of Brisbane’s cultural history and an event that Brisbane audiences feel ownership over. “We’ve all grown with it; audience and performer alike,” Alison says. Women in Voice, or ‘Madame WiV’ as she affectionately calls her, has been such an integral part of Alison’s life that every show acts as a sort of ‘signpost’ for where she was at in her life’s journey at that point in time.

Although Alison has been involved in numerous other ventures besides cabaret in her career, the way in which this style of performance allows for such an intimate connection with the audience is what keeps her coming back year after year. “When you’ve got no fourth wall … people in the audience are participants in it, they’re not passive consumers of the show,” she says.

This year’s Women in Voice will be packed full of humour with a “variety of voices and flavours” to keep audiences entertained and uplifted.

THE DETAILS
What: Women in Voice
When: October 18 to October 20
Where: Brisbane Powerhouse Theatre, 119 Lamington Street, New Farm
Cost: Starts from $64

For more information or to book tickets, head to the website.

OQ and Circa blend circus with opera this October