Writing the Laws, an Interview with Benjamin Law

No matter how things change, no matter how old we get, our families will always be there. Mostly they will annoy usâ€¦ but they will forever love us unconditionally.

The Creative Issue caught up with TV screenwriter, journalist and author Benjamin Law to chat about his experience when adapting his bestselling memoir â€˜The Family Lawâ€™ for Australian television screens.

Law, during his acclaimed writing career, has worked for many different publications which includes Fairfax Mediaâ€™sÂ ‘Good Weekend’,Â ‘The Monthly’ and ‘Frankie’ magazine, so I was interested to learn what inspired his writing in the first place. Law described himself as a nerd at school – also a gossip.. and a busybody, but mainly he was the kid who wanted to know everything. Growing up in coastal Queensland during the ’80s and ’90s, reading provided instant access to not only places that Law couldnâ€™t travel to, but also itÂ introduced him to people and gave him insights into the workings of their minds.

â€œI think that curiosity is really good for writers. Fiction writers are often immersed in questions of human behaviour and how people work, what goes through peopleâ€™s minds and, similarly, non-fiction writers are interested in the nature of the world and politics. One thing I really love about writing is that it’s basically an education.â€

“Through writing you educate yourself and you get to share that with your readership.”

Self-discovery and journey are important themes that are evident in Lawâ€™s work. This prompted a discussion on the elusive authors â€˜toolkitâ€™. â€œForming a good character, great description, metaphor, playfulness of language, being entertaining. I think thatâ€™s something a lot of people dismiss â€“ â€˜Oh if itâ€™s entertaining then it mustnâ€™t be importantâ€™. But entertainment storytelling is how we get absorbed into other peopleâ€™s worlds. When Iâ€™m teaching non-fiction people often sit back and theyâ€™re like â€˜wait, arenâ€™t these the tools of fiction?â€™ Iâ€™m like â€˜yeahâ€¦ itâ€™s the tools of storytelling.â€™â€ 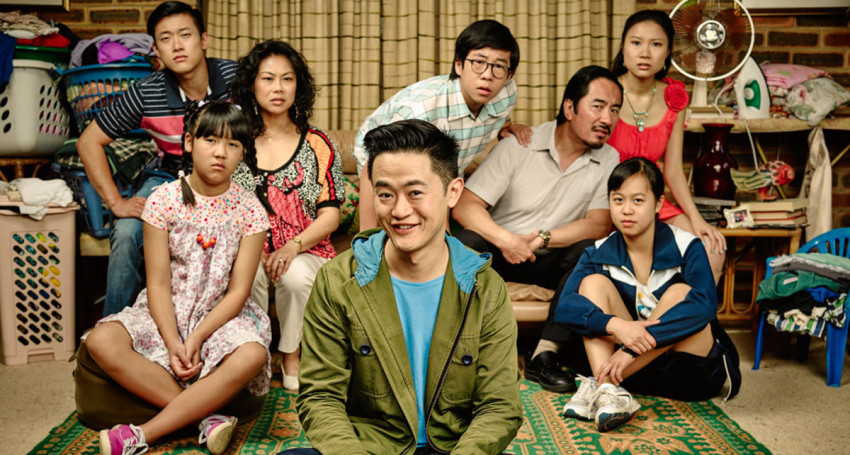 I asked Benjamin if it was always the plan to adapt his book or if it was it an opportunity that presented itself in time? Based on his 2010 bestseller, â€˜The Family Lawâ€™ television series, which screened earlier this year, gave insight into the struggles of everyday life. Dysfunctional met inappropriate met endearing. Set over a summer, fourteen year-old self-obsessed and self-proclaimed talent star, Benjamin (Trystan Go), found his world turned upside down when his parents, played by the wonderfully sensitive Anthony Brandon Wong and hilariously candid Fiona Choi, separated.

â€œâ€™The Family Lawâ€™ came about as a happy accident. I wrote a few essays for an anthology called â€˜Growing Up Asian in Australiaâ€™. The editor and publisher of that anthology wanted to know if I had more and that became â€˜The Family Lawâ€™. Once the book came out I was like â€˜wow, thatâ€™s really amazing, I have a book and people are reading itâ€™ and one of the people who read it was Tony Ayres.â€

â€He so got the book. We share exactly the same sense of humour. It is rare to have a non-white dude in his position in Australia. You know, someone like me, who is Chinese-Australian and is going to champion the work of another Chinese-Australian is really important because we are one of the most diverse nations in the world and you donâ€™t see that on our screen.â€

Producers Sophie Miller and Julie Eckersley, script editors Matthew Dabner and Kirsty Fisher, as well as the likes of Lawrence Leung and Marieke Hardy are some of the people who brought intimacy to the writerâ€™s room. â€œAs much as this is a story about my family, people are talking about the time their parents divorced. What that looked like and what that felt like. We wanted to make people cry as much as they did laugh and the only way you do that is by accessing real human emotion.â€ 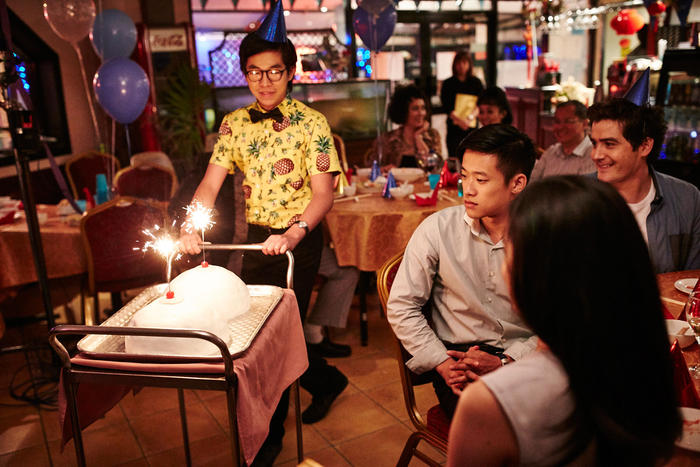 When adapting and creating the series, trying to find the balance between using real-life experiences and then being inventive, then seeing what worked for the television medium allÂ had to be considered. As the series is based on Lawâ€™s book, obviously that was the starting point. â€œMy book doesnâ€™t have a narrative arch. Itâ€™s a hodgepodge collection of stories so that doesnâ€™t really work for television. Television, you do have to carry people through a story.â€

Law aimed to transpose his feelings and emotions to the story. Some moments were completely made up, some inspired by truth and some wereÂ very similar to real-life events.Â An example of thisÂ was when Jenny (Benjaminâ€™s mother) kicks Danny (Benjaminâ€™s father) out of the house.

â€œFunnily enough, that moment is not in the book, even though the book ventures on the realities of divorce a lot. I didnâ€™t ever write about that. So in some ways the TV show, as much as itâ€™s fictionalised, it has more hard-hitting truths that Iâ€™ve never even spoken about.â€

Retaining cultural specifics such as having â€˜conchiâ€™ for breakfast instead of toast and Cantonese being spoken in the household, highlighting that the kids canâ€™t speak it very well all provided a foundation to this family home. â€œThatâ€™s not to say that these characters act like â€˜white peopleâ€™ â€“ no one ever talks about it that way,â€ Law explains. The intention was to make a comedy about divorce because, as Law points out, itâ€™s the funniest thing in the world. â€œObviously,â€ he adds. 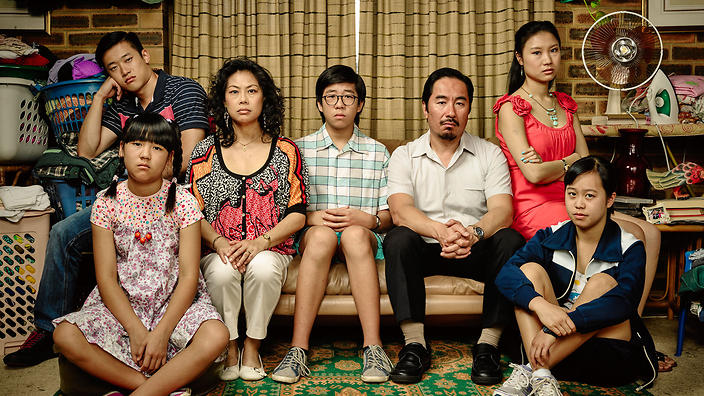 Law further elaborated â€œYou work yourself in loops because at the same time, weâ€™re also really aware that 90% of the cast is going to be Asian Australian and thatâ€™s not been seen on television very much. Like ‘Maximum Choppage’, which is an ABC2 show, was also produced by Matchbox Pictures who produced â€˜The Family Lawâ€™, also has a 90% Asian cast.â€ Law also references the American comedy ‘Fresh off the Boat’ (2015) which deals with an Asian migrant family. â€˜The Family Lawâ€™ was going to be different.

“We were aware we were breaking new ground but we didnâ€™t just want that to be the point of the show.”

One thing Law hopes people take away from watching â€˜The Family Lawâ€™ is the ability to see their own families in it. â€œItâ€™s been really, really gratifying to see those responses come in. Of course, strongly from the Asian-Australian community but also people from who arenâ€™t.â€

That was Lawâ€™s experience too growing up watching â€˜whiteâ€™ stories on screen. â€œThereâ€™s no reason why we canâ€™t identify with an Asian-Australian family. Aziz Ansari, an American comedian, says â€˜we identify with talking fish and we identify with anthropomorphic cars in a Pixar film.â€™ Really, we donâ€™t need to extend our imagination to much to empathise with other human beings who feel familiar and real. We wanted people to identify with things like â€˜Oh man, I so feel for that mum in that situation.â€™ Iâ€™m not a mum but I totally understand why you would feel like that.â€

When asked what he was most proud of about the series, Law stated many things that came to mind. For instance that the show has a 90% Chinese-Australian cast. â€œA lot of the actors you havenâ€™t seen on screen before, which I think is appalling when you see how amazing they are at it. Where have these actors been our entire viewing lives? Itâ€™s kind of heartening â€“ how great they are â€“ and kind of depressing that weâ€™ve been deprived of their acting skills.â€

Another highlight about the series was gracing television screens with some attractive male eye candy. â€œWhen was the last time there was a hot Asian-Australian sex symbol on television?â€ Law exclaims before proudly pointing out there are at least four on screen. One thing, however, that cannot be forgotten is the intelligent writing Law shares with the entire creative team.

“I think we got to some universal truths about how tough family can be.”

The entire cast including Trystan Go was a brilliant find. However only one opinion matters most here in terms of on screen depictions. I asked Benjamin what the â€˜realâ€™ family Law thought of the series.

â€œYeah, they completely love the show,â€ Law reveals whole-heartedly and without hesitation. â€œIn fact we spent a whole day on set together because my family made a cameo in the show in Scene One, Episode One. Weâ€™ve been really lucky to become real-life friends with the actors playing the family. Itâ€™s been a really wonderful thing and itâ€™s thrilling to see them do such great work on screen.â€ 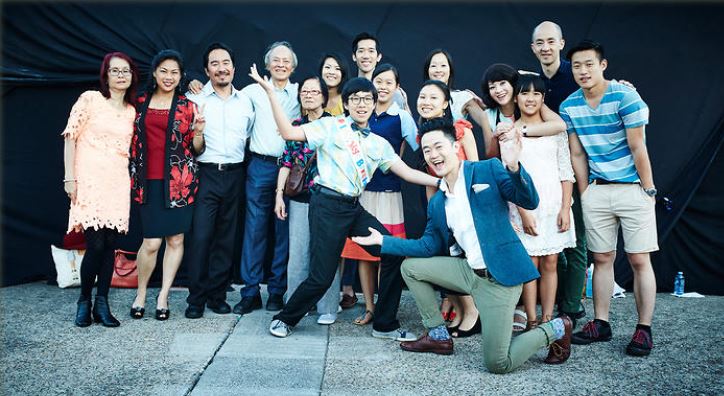 After testing the waters with this series and working on developing other projects, television is seemingly the natural transition in Lawâ€™s career.

â€œI am really happy to announce that Season 2 [of â€˜The Family Lawâ€™] is already in development. Iâ€™m working on a few other projects as well. One is top secret and Iâ€™ve just come off working as a researcher for a documentary that will be on SBS later in the year. Iâ€™m really enjoying working in TV. Itâ€™s really new and fun. The people are great. Especially the people who Iâ€™m working with on â€˜The Family Law.â€™â€

We meet the masterminds behind Spruce Kitchen