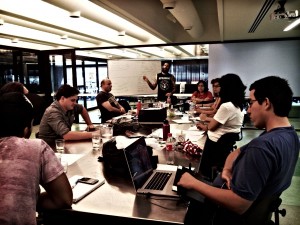 The three-day program is a feast of creative workshops and indie networking, with highlights including the coveted Golden Stapler awards and a performance from hipster Ãœbermensch The Bedroom Philosopher.

But it all takes money, which is why the ZICS team have launched a crowdfunding campaign via Pozible.

The organisers hope to offer something for every budget with their pledge rewards ranging from a simple thank you ($1) to personally shaving Justin Georgeâ€™s illustrious beard ($5,000!).

Itâ€™s all about bringing a passionate subsection of Brisbaneâ€™s creative community into an open, collaborative space â€“ and realising independent publishing doesnâ€™t need to be a lonely business.

I had a chat with ZICS organiser and local comic stalwart Zac Cameron-Smith.

CD: You cut your teeth on the Ashcan project, right? Can you tell me about that?

Zac:Â Ashcan is a community-based comic collective or publishing label.Itâ€™s a vehicle for local talent to get their work out if theyâ€™re new, or if they work fulltime or are at uni and donâ€™t have time to produce a whole comic.

We take scripts for short runs and then we find that person an artist, and release a compilation every three to six months.

CD: How did ZICS come about? 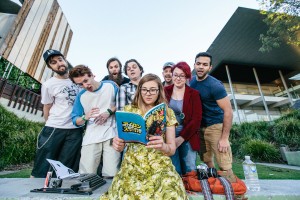 Zac:Â Jeremy Staples kicked the whole thing off. Itâ€™s not necessarily a comic convention, but more about local creators â€“ their art, their comics, their zines, and just sharing ideas.

While weâ€™re not hugely opposed to the idea of cosplay and steampunk, itâ€™s not the primary focus of what we want to get out of ZICS. With things like Supanova and Comic-Con, the artist alley tends to be overshadowed by the other parts of the event.

Weâ€™re trying to really focus on that side of things.

Zac:Â CD: What did you learn from your previous crowdfunding campaign (for indie comic Ironside)?

Zac:Â I learned a lot.

This campaign is more rewards-based, and there are definitely a lot of cool things up there. Itâ€™s important that people see the money going towards an outcome that hasnâ€™t happened yet.

CD: It sounds like thereâ€™s a real community building here.

Zac:Â The shame about Brisbane is that everybody is a little cliquey. The idea with ZICS is weâ€™re going to be a hub for all the comic and zine creators to get together on a central footing.

At the moment there are these little pockets all around that people donâ€™t know about, because theyâ€™re doing this independently.

Itâ€™d be really great to see everybody sharing ideas and bouncing off each other.

Where:Â The Edge, by the State Library of Queensland

Top 5 Splendour in the Grass performances